Most musicians know a bit about “delay”… not like… my flight is delayed…. but the music kind.

For example, your guitar player might have a Boss DD-3 Pedal

or your vocalist might like delay on his/her vocal. If you’re not a musician, think of this as echo. The basic premise is a repeated signal with decay over time. The time interval (speed), amplitude (volume), and feedback (how quickly the delay dissipates) are variables of modern delays, but they also happen naturally.

These are some examples of natural delay:

Now, if you lived before the 1950’s, these kinds of things were your only option for recording a delayed signal. Worse, you would likely be trying to record to a metal wire or some such nonsense so why not load your sherpa up and get your session started. America didn’t even know about magnetic tape until we took it from the Germans after WWII.

Luckily, these days we can get our bands down off of the mountain. Thanks to some real music geniuses, we have delay at our fingertips in every studio and stage on the planet.

It all started with tape delay/tape echo.

One of the first delay effects produced was built by legendary music inventor Ray Butts. He created the EchoSonic in1952, which was the first ever portable guitar amp with a tape delay built in. Ray’s invention would be remembered by music history as the “holy grail” of Rockabilly music. The second EchoSonic amp ray built was sold to Chet Atkins and the third (disputed) became the go-to amp and effects unit of recording engineer Scotty Moore, who used it on every Elvis record from 1955 to 1968.

It was Elvis’ use of this amp and tape delay system that spurred development of portable tape delays for use in both studio and on stage.

One early example is the Echoplex which was a modified / stand-alone version of the tape delay unit inside Ray Butts’ EchoSonic Amps. 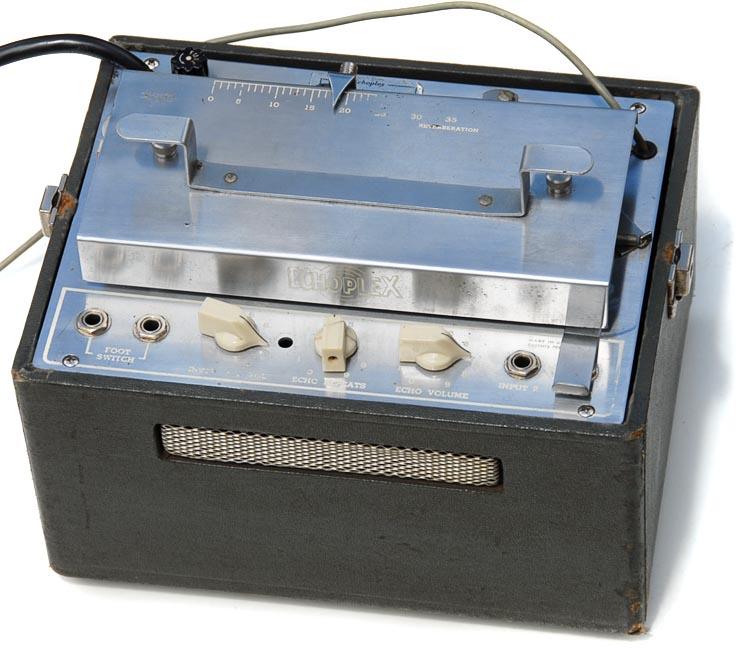 How does it actually work already!

All tape delays run on the same basic principle: 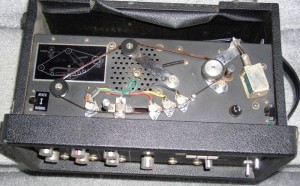 Some tape delay units, like the EchoSonic and the Echoplex, had stationary playback heads and a slide to adjust the physical position of the record and erase head to achieve variable delay times. Other later models used changes in tape speed as the primary method of changing delay times.

Tape delay units with multiple playback heads could be selected in patterns to change the rhythmic nature of the delay. Some of these would even allow for line outputs from each playback head individually.

Every time a signal from tape is re-recorded there is degradation to the signal quality. The effect is that each repeat has less frequency bandwidth and more harmonic distortion which adds to the sound of each echo being farther away. These inherent “flaws” of analog tape delays are now sought after by modern musicians looking for more vintage sounds.

Bandog just released a cover of the song Driver’s Seat last week. One of the production choices we made on the vocal was to add delay. We also wanted a bit of a warmer sound and we finally settled on using the Kramer Master Tape plugin. This plugin gives the track some of the characteristics it would have if it were recorded to tape including wow/fluter (another article altogether), and tape noise. In addition, it acts as a tape delay.

Driver’s Seat is available for download on iTunes, Amazon, and at our Music Store… but also check out our production video on how we applied Kramer MPX Tape Delay (digital) to get the vocal sound we were after.

As you can hear in the video, tape delays are a great way to get a warm vintage delay. And thanks to the advance of digital modeling of analog gear, some companies are giving you the feel vintage in a small package. For the gigging musician, check out this stomp box by Strymon called El Capistan dTape Echo

They use the same DSP as AxeFX and according to various reviews, this pedal nails it. I haven’t tried it for myself yet, but after writing this article it is on my wish list… along with thousands of dollars of analog gear that is hard to find in the first place.

Thanks for reading this post. As we continue to release more music every month I want to give you all a little peek behind the curtain, some fun stuff for us gear heads, helpful info for musicians, and an interesting read for those who just love music but wonder… “how did they do that.”

We love hearing from listeners, fans, and critics! Please leave comments and let us know if there is a topic you would like covered or if you have a resource to add to the conversation.